Next will be a review on robot vacuum cleaner Chuwi iLIfe V7S and its application in real life. And also a little graphomania on the topic of using robots in the household.

In (already) long ago 1997 Lord Luc Besson and Jean Paul Gaultier chose to bless the world with their precious movie “The Fifth Element” (Yes, I believe that in this film the costumes and their specific design have exactly the same value as the rest of the story).

In the narrative one of the characters- Jean-Baptiste Emanuel Zorg mentioned ,that a littlebit of chaos- is good. Citing the example of broken glass which activated a small crowd of home robots for various purposes…

So- it has been almost 20 years and finally I have my own little mechanical servant.

The thought of purchasing robo-vacuum shaped in my head a couple of years ago, however, as with much in life, from this thought there were 2 parties:

– to buy Fulmar which will be more in the way than help (even for 150) it was even more pathetic.

In addition, almost every review of the robot vacuum cleaner that caught my eye were present phrase about the need to collect from the floor that there could be so that the cleaner does not get stuck or jammed socks and Slippers. Yes, he would not have gone to hell! I told him that, the maid, or where!?

Therefore, the purchase decision was postponed from month to month a few years until in the mail fell a letter from one of the cashback services where I was. The letter was a notification that the account has accumulated a hundred bucks and offer to withdraw this amount.

“Well… means fate” I thought, and went to dig the vastness of the Chinese stores. The search led me to Herbest- at the time of purchase they were the lowest offer for the price. Given the fact that I had positive previous experience with this store- I without hesitation made the order. Although in fairness, I must say- some thoughts I visited: doubt between the model V7 or V7S.

Yes… Bluetooth in this model. Quite! The application is available for model V7, model V7S supports ONLY the remote control remote control.

Ordering- a couple of weeks delivery- getting.

In the box lay:

The main parameter for me in the cleaner were:

In General, I should note each of these items were completed… in one way or another… But more on that later.

So- the first start and after a couple hours crawling the vacuum cleaner dragged literally a third hopper dust. Can't say the result is amazing. However, a little glad that we have in the house is not as dusty as it might seem.

Following the week of use with a more or less daily basis the cleaner had collected almost a full hopper dust. And Yes…. as I feared- laid out on the floor socks daughter the vacuum cleaner absorbs with great enthusiasm. On the other hand seems to have managed to convince the younger that cleaning is a necessary condition in order that her toys were not eaten by the vacuum cleaner. Still works, though a quantity of beads and small toys from kinder surprises we threw. However, the fact remains- in the morning before leaving for work have to look around the apartment to the floor nothing “clearly” not lying (Slippers can not hurt, but socks daughter choked repeatedly). So what's the point “not to adjust to the cleaner” from my point of view failed. Trying to convince myself that it's instilling the right habit not to throw things on the floor for the whole family….. but gnawing worm of doubt ).

After a few days of work the wife said that the vacuum continuously gets stuck on the rugs in the bathroom. Rolls of these flat round rugs (of Ideas) in a lump- crawls on them and squeaks. This item did not cause me the slightest contradiction because was the last straw of my patience. With a light heart rugs went in the trash. It is literally the next day I bought another rug- bigger is better and softer….. Imagine my disappointment when we found that in 7 cases out of 10 the cleaner hangs on the corner of the rug and helplessly spins there wheels….. thank God if you manage at least to get off yourself (but it happens not always). This fact is clearly shown in the video then.

Listening to a complex stage of life of ribopyranose was a carpet with long pile. approximately half of the cases picked up acceleration to jump on him. And in those cases, when to call a – it crawls extremely slow (and the good of it crawling- a little!). To unsubscribe from this carpet I'm not for a second- so the cleaner will have to endure through a long NAP and then.

Finally, the last difficult part – chairs. Surprisingly despite his size – the cleaner is quite fun under our folding chairs. And often it hangs for a very long time: the proximity sensors on the face cleaner are higher than the bottom rung of the chair. Trying to crawl out- the poor creature crawls on her belly and hangs. then slipping backwards, unfolding from the opposite side and trying to go there…. and again hangs. So it can take a very long time- the morning of the second day after the purchase we came home and found chairs in different corners of the room. So now “fold the chairs and put against the wall” – one more item to my morning routine. In fairness I must say that the very existence of folding chairs at a dining table endlessly infuriates me and probably soon I will return back to the full-sized version of the normal chairs. So this point is rather positive.

On the other hand- despite all these little annoying things – for 3 weeks I don't think about the vacuum cleaner. From the word “quite”. I walk barefoot around the house and not think about the fact that they cling to crumbs and / or hair (wife- hairdresser, almost every week cuts 2-3 people at least. In the house constantly there is small hair on the floor.. rather was). At the corners and along the baseboards now not accumulate clumps of dust- before they started to be formed already after 2-3 days of cleaning. Last weekend the wife suggested that it would be nice to wash the floors- no problem: put a rag, filled with water the second bunker, 40 minutes of rustling and floors washed. Not ideal, but no one was crawling ass up with a rag in hand.

In short – for relatively little money I got a toy that is quite utilitarian. With some reservations fully resolved the issue daily dry cleaning of the apartment (Yes Yes – throughout the apartment… approximately 70 squares). However, here we must make another reservation- we have the house all floors are on one level and between the rooms there is no threshold. So the pink puck quietly left between the rooms without obstacles.

The use of robot in our apartment:

Bonus- while preparing the review, the daughter renamed the cleaner from Beetle (Beatles) in R2D2: 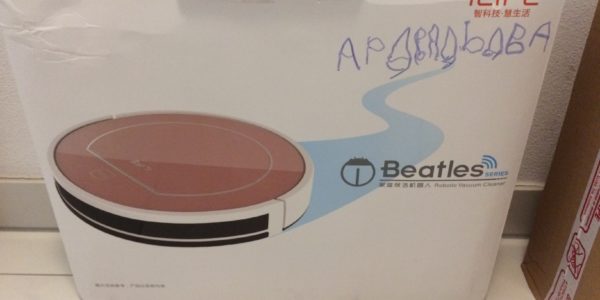 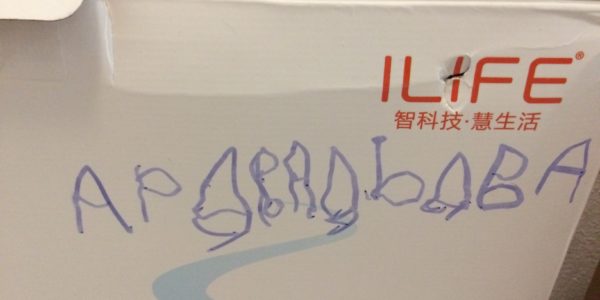 THE LINK TO THE CLEANER

2 thoughts on “Robot vacuum Chuwi V7S: Machine for life or life for machines.” 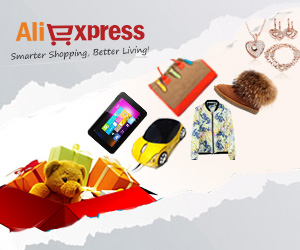